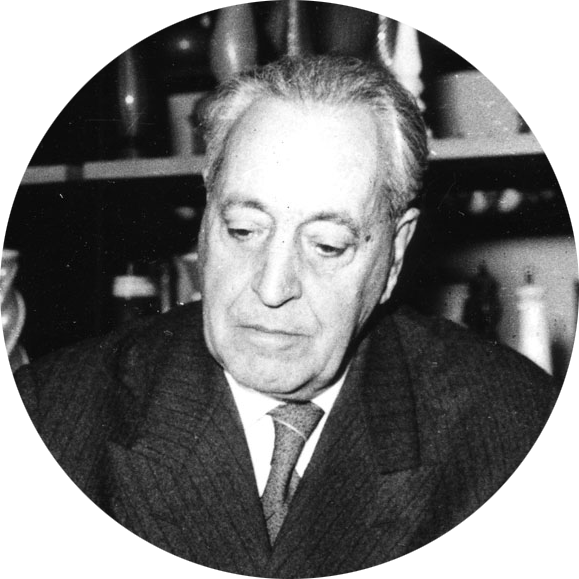 Ercole Barovier (1889-1974) was an artist and chemist who was a descendant of Angelo Barovier, the renowned 15th century artist and glassmaker.  Ercole joined the family glass business with his brother Nicolò in 1919 when Artisti Barovier became Vetreria Artistica Barovier & C.  When Nicolò left in 1933, Ercole became the sole owner of the factory.  In 1936 Barovier merged with Artemio and Decio Toso (owners of S.A.I.A.R. Ferro Toso), descendants of another old and established Murano glassworks company from the 17th century.  The new company called Ferro-Toso Barovier changed to Barovier & Toso & C. in 1939, and Barovier & Toso in 1942 and remains so named to this day.  From 1930 until 1972, Ercole Barovier was head designer of the firm.

Over the course of his prolific and illustrious career, Ercole Barovier developed new colors and numerous decorative techniques contributing significantly to the modernization of art glass.  Since the 1920s, Barovier was recognized for his innovative work with murrine glass.  During the 1930s he spent much of his time experimenting with new multi-colored effects and perfecting a technique he named colorazione a caldo senza fusione.  Barovier participated in many exhibitions in Italy and abroad and was awarded numerous prizes including the Grand Prix at the 1937 Exposition Internationale des Arts et Techniques dans la Vie Moderne in Paris.  During the post-war period, Barovier focused on more traditional techniques which he reinterpreted such as a tessere.

In 1947 his son Angelo joined the company, began designing in 1951, then became artistic director in 1972.  Following the family’s history, Angelo’s son Jacopo next took over as director along with Mario Toso’s son Giovani.  During the 1980s until today, many designers have collaborated with Barovier & Toso including Matteo Thun, Noti Massari, architects Renato Toso and Toni Zuccheri.  In 1995 Barovier & Toso opened its museum with more than 250 masterpieces from the 19th century to 1975.