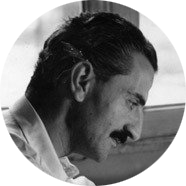 Architect and designer, editorial writer and professor, Carlo De Carli graduated in architecture from the Politecnico di Milano in 1934.  He worked with architect and designer Gio Ponti before setting up his own studio.  De Carli’s designs quickly became widely admired and were produced by major Italian manufacturers.  De Carli worked closely with the Milan Triennale, taught at the Milan Polytechnic where he was also dean of the Faculty of Architecture, wrote editorials for the Interni magazine, and in 1954 won the Compasso d’Oro award for the Cassina chair model 683.  Very close to Gio Ponti, in the 1940s and 1950s he tackled the Italian furniture issue both as a designer and cultural promoter, and was a frequent participant in debates and initiatives oriented towards increasing collaboration between manufacturers and architects.  While respecting functional and ergonomic necessities, De Carli attempted to go beyond a strictly rationalist approach and express his own creative potential.

Carlo De Carli for Cassina
Pair of Armchairs Model 802 in Navy Velvet
Italy, circa 1954
Back to top