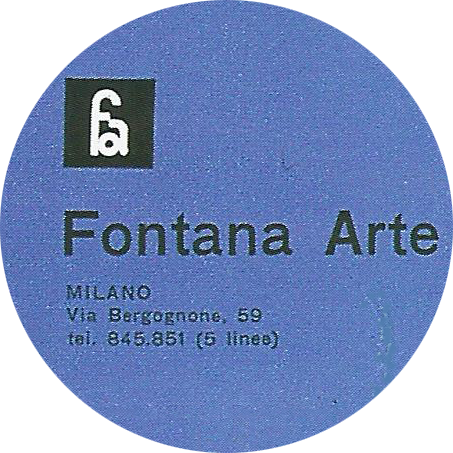 In 1930 a partnership emerged between Luigi Fontana and Gio Ponti, a then successful young Milanese architect, artistic director for Richard Ginori, and founder of Domus magazine.  First edited under the Luigi Fontana SA brand, a production of the first light fixtures, furniture and decorative arts ensued.

In 1933 with the purchase of Pietro Chiesa’s small artisan workshop Bottega (renowned for making stained-glass windows and innovative lighting fixtures of great quality), Fontana Arte was launched as a division specializing in modern impeccably crafted furnishings.  The first director was Ponti, then later upon his suggestion became Chiesa.  The first in its field, Fontana Arte under Chiesa’s brilliant direction became a world leader in artistic glass used for the production of furniture, tableware, boxes, portrait and picture frames, mirrors, sculptures, other objects, and stained-glass windows.  It was especially in lighting that Fontana Arte proved remarkably avant-guard, incorporating the advances being made in lighting technology with the introduction of cleaner lines. Not only did Chiesa’s lamps exhibit a modern, functional form, but he paid great attention to the details and finish which enhanced the quality of their construction.  In less than 10 years between 1933 and 1940, Fontana Arte became a symbol of taste, style and refinement.  Despite its international success, the company’s economic profits, although considerable, were hindered by the astronomical costs of such artistic productions.  Following outbreak of WWII, there was a substantial interruption of production with sales of glass reduced to almost nothing.

With the sudden death of Chiesa in 1948 and subsequent years of unsuccessful successors for the position of artistic director, Ponti recommended the renowned French glass maker and decorator Max Ingrand in 1954.  Ingrand was the ideal candidate to succeed Chiesa with his similar formal training and professional experience in the art glass sector and his work exhibited equally exquisite craftsmanship. With his impeccable use of metals and expert crafting of the glass parts, Ingrand’s work was in line with Fontana Arte’s grand tradition.  In contrast to its initial production of artisanal one-offs and commission works during the Ponti-Chiesa period, the market’s rapid evolution and commercial success of the company inevitably led Fontana Arte’s production to become semi-industrial while still preserving high quality and costly standards. Success in sales were also spurred by collaboration with young artists including Lucio Fontana’s ceramic bases for tables designed by Roberto Menghi and Duilio (‘Dubé’) Barnabé’s painted glass for table tops, decorative panels, bowls and dishes.  During this period, Fontana Arte presented the most beautiful fair stands and interior and exhibition spaces, often designed by Max Ingrand himself, and was featured in the best trade press.

For more information on Max Ingrand, please visit the ‘Max Ingrand’ page on our website.