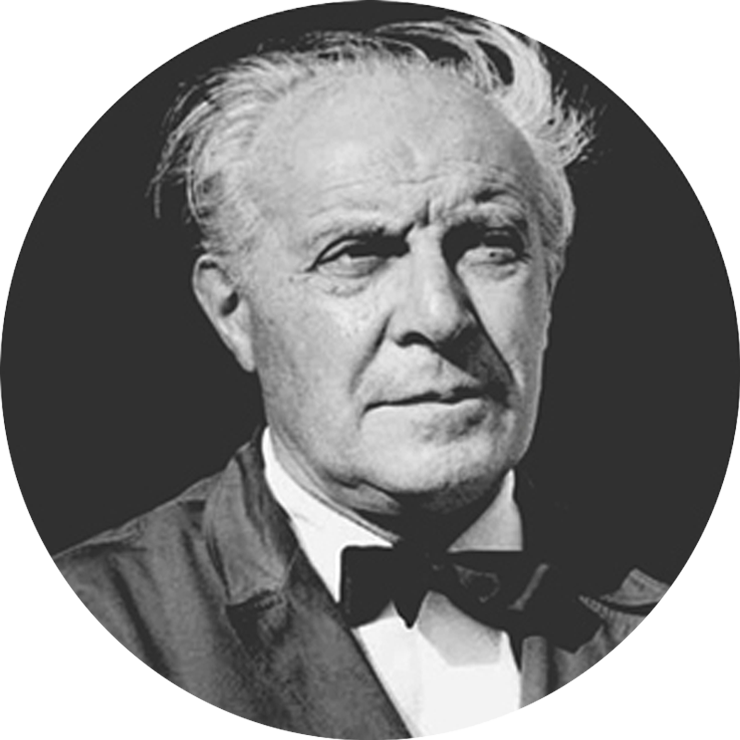 Gio Ponti was one of Italy’s greatest and most influential architects of the twentieth century and a “father” of modern Italian design.   During his long and industrious career as an architect, he was also an interior, industrial, furniture and decorative arts designer, painter, curator, costume designer, editor, journalist, professor and writer.

Born in Milan, Ponti studied architecture at the Politecnico di Milano and graduated in 1921 where he would later teach from 1936 to 1961. Influenced by the neo-classical Novecento Italiano artistic movement in his early years, Ponti opened his first architectural practice in 1927 with Emilio Lancia lasting until 1933.  Between 1933 and 1945, Ponti partnered with Eugenio Soncini and Antonio Fornaroli completing important projects in the industrial sector including the School of Mathematics at Rome University, Faculty of Letters and Dean’s Offices at Padua University, the Fiat offices and the Montecatini Building.  Between 1952 and 1976, Ponti partnered with Alberto Rosselli and Antonio Fornaroli, and at the pinnacle of his career, completed his best-known building the Pirelli skyscraper in 1956.

Ponti was known for his work in a multitude of materials and a wide variety of projects.  He designed ceramics for Richard Ginori, glass bottles for Venini, enamels for Paolo di Poli, mosaics for Gabbianelli, silver for Christofle, tableware for Arthur Krupp, lighting fixtures for Artemide, Fontana Arte and Venini, sanitary ware for Ideal Standard, and stage sets for La Scala. Some of his clients for furniture included Casa e giardino, Arflex, Cassina, Singer & Sons and the Nordiska Kompaniet. Ponti’s best known furniture design is the 1951 Superleggera side chair (no. 646) manufactured by Cassina in 1957. In the 1950s he collaborated with Piero Fornasetti to design furniture and interiors. He designed ocean liner interiors such as the Conte Grande and the Andrea Doria in 1950.

In 1928 Ponti founded Domus magazine, a highly influential publication dedicated to architecture, arts and crafts, and design. In 1941 he resigned as editor of Domus and set up Stile magazine, which he edited until 1947. In 1948 he returned to Domus, where he remained as editor until his death. Ponti also wrote nine books and edited eight books alone and with others.

Ponti received numerous awards throughout his illustrious career including 1956 National Grand Prize, 1954 and 1957 Premio Compasso d’Oro, and an honorary degree at the Royal College of Art, London.